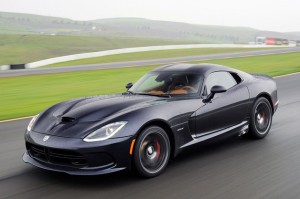 Almost a year to the day after SRT president and CEO Ralph Gilles first introduced – and kissed the fender of – the 2013 SRT Viper at the 2012 New York Auto Show, the high-performance coupe has begun shipping to dealers. The first production cars started rolling off the line at Chrysler’s Conner Avenue Assembly plant in Detroit back in January (a facility Gilles lovingly compares to Santa’s workshop), but The Detroit News is reporting that the cars just started heading to customers across the US on Sunday.

Two of the first examples destined for driveways include a Stryker Red example that was the very 2013 Viper to be sold (the car was won by Scott Thomas of Oklahoma City at a Barrett-Jackson charity auction for cancer for $300,000), along with a white example headed to Gilles’ personal collection. The report says that Gilles took delivery of his Viper and put just 30 miles on it before heading to New York for this week’s auto show. What, he didn’t drive?