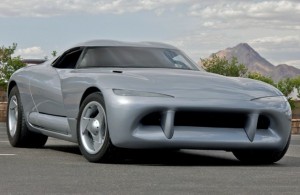 As car lovers, it’s always hard to find a good television show with decent cars, but what the 1990s show Viper lacked in acting, scripting and plot, it more than made up for with cool cars. For starters, the lead car was a Dodge Viper RT/10, but, on screen, it was able to morph into its “Defender” mode making it an armored coupe with a full arsenal of weapons.

Fortunately, you don’t have to be a fan of the bad show to love its lead car, and if you really want one, a Defender is up for auction right now on eBay. According to the listing, this car is the real deal – not a clone – and it comes with a V8 engine (not sure what happened to the V10?) and plenty of swag and memorbilia.