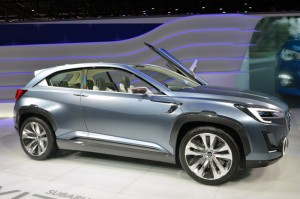 Subaru is in the middle of a new product bonanza. It has recent replacements for the Impreza and Forester at dealers, and soon we’re getting the WRX, Legacy and if rumors are right the new Outback as well. Now, there are rumblings that there could be two more models from the Japanese brand on the way with styling inspired by the Viziv 2 concept from the Geneva Motor Show.

According to a company insider speaking with Motor Trend, the crossover concept shows the way for the brand’s future design language. The shape would be used on a smaller CUV that is still being kept quite secret, and a second, larger one that would replace the recently axed Tribeca. The bigger model is the first priority and is planned as a new technology showcase.

It’s rumored to use a turbodiesel, four-cylinder boxer engine that would be boosted with one electric motor on the front axle and two at the rear, with a plug-in hybrid system sourced from Toyota. It should provide a great mix of torque and fuel economy. A smaller flat-six engine would be a second powertrain option. Though the Viziv 2 concept only seats four, the production version would probably offer three rows.

Subaru has to make sure to get its larger crossover right this time. The Tribeca was a failure, and a new model would likely carry a different name to get out from its shadow. We’ve been hearing rumors about a replacement for a while now, and the company is gunning to grow even more in the US. Adding more CUVs to its ranks would hardly be a surprise. The source says to expect the model by late 2017. We’ve contacted Subaru to see if it would confirm any of these details, and we’ll update this story when we have a reply.