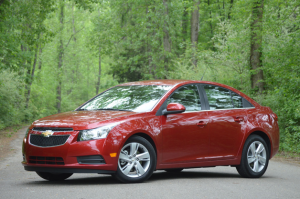 Volkswagen has gotten pretty comfortable hogging the – admittedly small – non-premium diesel car market in the US. With Golf and Jetta, the German automaker has been the one and only choice for those interested in the torquey, high-mpg merits of turbocharged diesel power.

However, US customers seem to be growing more interested in the technology that has been the primary mode of propulsion in most of Europe for many years now. Mazda is quite close to bringing its Skyactiv-D diesel engines to our shores, and Chevrolet has finally maneuvered to repurpose its European 2.0-liter turbo-diesel engine for US specification, which means it’s cleaner here than overseas.

The first application of this rather impressive diesel engine is in the compact Chevy Cruze, which I spent a recent morning testing out. General Motors as a whole has high expectations for its new TDI-buster. Here’s why: