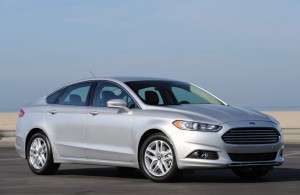 According to The Detroit News, Ford is issuing three separate recalls on new 2013 models, one of which affects 465,000 vehicles. That largest recall comes as the result of 600 complaints of fuel leaks, which could lead to a fire risk, the report indicates. Included in the 465k-unit recall are the 2013 Explorer, Flex, Fusion, Taurus and Police Interceptor sedan, as well as the Lincoln MKS, MKT and MKZ.

According to Ford, in a statement obtained by the Detroit News, “The condition could result in customers detecting a fuel odor, or in some cases, observe evidence of a fuel leak on the ground.” Ford continues, “While a fuel leak in the presence of an ignition source may result in a fire, there have been no reports of fires. We are not aware of any accidents or injuries attributed to this condition.”

In addition to all of this, Ford is recalling 500 examples of its 2013 Lincoln MKZ equipped with engine block heaters. The Detroit News states that, according to Ford, the insulation on the engine block heater’s electrical cord may crack in cold temperatures.

Lastly, an extra 23 Ford Fusion models are being recalled due to potential impairment or loss of steering control. The News says this is due to faulty steering gears that may have been built without an internal retaining clip.

Since launching, the 2013 Fusion has been the subject of a number of recalls, two of which have involved the potential for engine fires. The fresh-faced 2013 Lincoln MKZ has had its own share of problems, with early production woes leaving many dealers without cars. Instances like this are causing Ford to rethink its vehicle launch strategy, in which the automaker will work better to smooth out the new car launch process, with the goal being fewer quality issues and recalls.