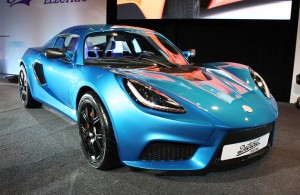 Startup EV-maker Detroit Electric is having a little trouble getting out of the gate, according to a report in The Detroit News. The (obviously) Detroit-based automaker says production of its SP:01 sports car (pictured) will be delayed by at least a month, citing problems with securing a manufacturing facility.

When the SP:01 debuted in early April, Detroit Electric executives told members of the media that a facility in the metro Detroit area would be used to produce the SP:01. The Detroit News reports that the company is currently in talks with a partially occupied space in Plymouth Township and that it hopes to reach an agreement soon. Production is now scheduled to begin in September, with an annual production capacity of 2,500 units. The facility will also employ more than 100 new workers.

Detroit Electric is hoping to sell 999 of its SP:01 sports cars at $135,000 a pop. The company, which has largely been funded by private investors, also plans to launch sedan and hatchback models in the coming years, thanks to a partnership with China’s Geely.