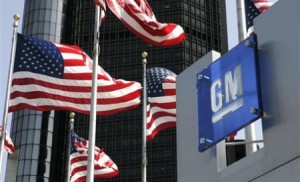 General Motors Company said it is recalling 473,841 Chevrolet, Pontiac and Saturn sedans globally to fix a condition that could lead the cars to roll when the drivers think they are in park.
The number one US automaker said on Friday that it was aware of four crashes that resulted from the problem, but no injuries.

The company said the recall affected Chevy Malibu, Pontiac G6 and Saturn Aura cars from model years 2007 through 2010 and equipped with four-speed automatic transmissions.
GM will repair the condition in which the transmission gear position may not match the gear on the shifter.

The recall affects 426,240 in the US, 40,029 in Canada and 7,572 in other markets. Dealers will add a reinforcement to the shift cable end fitting to prevent that part from fracturing, GM said.