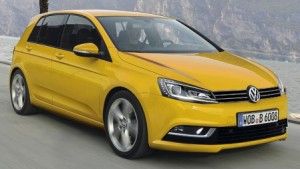 Volkswagen has revealed the first official details to its seventh-generation Golf, including its classy new interior, in a heavily cloaked media event ahead of the new car’s official unveiling set to take place in Berlin in early September.

The new model, which is claimed to be up to 23 per cent more economical than its predecessor, is planned to go on sale across Europe in November, replacing today’s sixth-generation model introduced in 2008.

The new Golf 7 will be the first Volkswagen model to use the company’s heavily hyped MQB (modularen querbau, or modular transverse architecture) platform. MQB is a flexible architecture that can be stretched and widened, saving significant development and production costs for new models.

A photo of the new Volkswagen Golf was leaked on a german website.