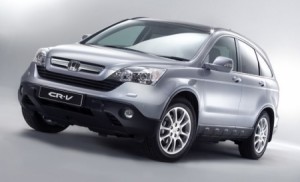 Honda Motor Co is recalling about 489,000 CR-V crossovers in the US, Europe and Africa, from the 2002 to 2006 model years because an electrical switch in the driver’s side door could melt and cause a fire.

Honda and the National Highway Traffic Safety Administration announced the recall Saturday for 268,000 vehicles in the US. Honda is also recalling 220,000 CR-V vehicles in Europe and 98 in Africa for the same problem, Honda spokeswoman Akemi Ando in Tokyo said Sunday.

Honda said rain or other liquids could enter through a driver’s open window and damage the master power switch on the door. If that happens, the switch could overheat and melt, causing a fire.