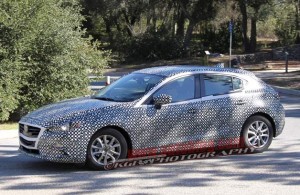 Following exciting new models like the 2013 CX-5 and 2014 Mazda6, Mazda is getting ready to introduce the next generation of its high-volume compact, the Mazda3. After talking to several of Mazda’s dealers, Automotive News is reporting that the automaker is planning to introduce its new compact this fall, which is earlier than what was originally reported.

Aside from what we’ve seen in recent spy shots and what appeared to be a full-scale design mockup back in October, there is little information about the third-generation 3, but we can see that the car will get plenty of cues from Mazda’s stylish Kodo design language, and we expect even more technologies from the company’s SkyActiv efficiency program to come to bear.

AN says that Mazda is hoping to top 300,000 sales this year in the US, and the sooner Mazda can replace the current aging 3, the better chances it has at reaching that goal.