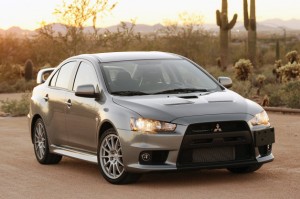 We have all manner of unofficial metrics in the auto industry. No doubt you’ve heard some of them, like the butt dyno. Another popular measure is the smiles-per-dollar index – how entertaining is a car versus its price. Cars like the Mazda MX-5 Miata, Scion FR-S and Mini Cooper S, for example, score quite highly, while vehicles like the BMW M5 or Audi RS7 are great to drive, but score lower because of their much higher price tags. For a long time, the king of the smiles-per-dollar index was arguably the Mitsubishi Lancer Evolution X, which blended hair-raising thrills for the price of a well-equipped Ford Fusion Titanium.

Now, it looks like the Evo will need to hand over its title, as this generation of the rally-derived rocket is likely to be Mitsubishi’s last – at least for a while. There’s been no mention of just when production of the current car will end, so if you’re in the market, we’d suggest trying to find a dealer with inventory ASAP. The news comes from the automaker’s Japanese mothership, which says the brand will instead focus on utility vehicles and EVs. While there are no direct plans for a successor, an Evo XI as it were, the door remains open for a different kind of beast, according to Mitsubishi.

Truth be told, this has been a long time coming. The death of the current Evo and its resurrection with a set of batteries has been whispered about for years. We most recently reported on it a few months ago. And we’re optimistic about a future hybrid successor for the high-performance Lancer. Consider the way the top echelon of the auto industry has embraced performance hybrids – with cars like the Ferrari LaFerrari, McLaren P1 and Porsche 918 Spyder, the idea of a high-performance hybrid is gaining traction. This certainly has us less fearful of an electrified Evo successor.

Still, we’d be lying if we said we weren’t feeling pretty terrible about the end of the Evo X. We’d like to know how you feel, though. Should Mitsubishi have done this years ago? Would you consider a hybridized successor if the smiles-per-dollar index were similar to the current car? Should there be a gas-powered Evo XI? Let us know what you think in Comments.