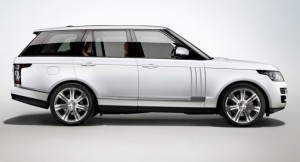 After a more luxurious ride and have some cash to spend? Then you’re in luck, with the latest Range Rover being unveiled as the most expensive ever made!

Setting you back £140,000, the latest Autobiography Black is set to be released in August 2014 and is aiming for a core market of the superrich and ultra-stylish, cornering a demographic that’s already been known to favour the Land Rover for glitzy film premieres and a smooth, sleek driving experience.

And, with the most expensive Land Rover for sale, those with the cash to afford it can’t go wrong, with the vehicle offering an array of luxury features that will make any driver feel like a VIP.

The cabin is an awe-inspiringly opulent sight, featuring first class airline seats with in-built back massagers to soothe passengers as they ride, a champagne chiller, individual electronic tables swathed in black leather, and ten different mood lighting options to really make this vehicle earn the reputation of a prestige model.

Rear passengers will also be treated to two 10.2-inch television screens, and their viewing experience won’t be interrupted by prying eyes as the car is fitted entirely with blacked-out windows.

The Range Rover is also kitted out with a five-litre supercharged V8 engine that can reach 0-60mph in an astounding 5.5 seconds, with a top speed of 140mph.

This prestige model will also be joined by a “greener” hybrid version later in the year, meaning you can drive in the lap of luxury and know that your carbon footprint isn’t making too much of a dent on the environment.

Land Rover – the car of choice for the rich and famous

The Land Rover series has, as of late, become the prime vehicle of choice for the rich and famous, with Prince Charles and Kate Middleton deigning to be chauffeured in one as they left the hospital after the birth of their child.

The car has also received a high level of publicity after being featured in the latest Bond adventure, Skyfall, which showed it off as a vehicle fuelled entirely by action and danger, giving an appealing edge to the car that an association with the master spy seems to inevitably impact upon people.

And, now with the brand’s most luxurious car yet, Land Rover can be sure to capitalise on this profitable market of the rich and famous.

In an interview with national newspaper the Daily Mail, Phil Popham, group marketing director for Jaguar Land Rover, stated, “The Range Rover Autobiography Black is our most luxurious specification yet.

“It epitomises sophisticated design with immaculate attention to detail. The subtle, elegant and luxurious finishing touches combine with a first class experience for both driver and passengers to deliver new levels of exclusivity to our customers.”

So, keep your eyes peeled in 2014 for one of the newest luxury cars muscling its way into the market!