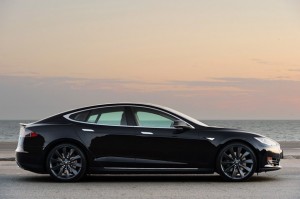 Historically, the intersection between electric vehicles and drag racing has been really small – or so we guess, at least. But the advent of Tesla in the auto marketplace, and the subsequent performance offered up to drivers by way of battery-powered cars, has caused even racy publications like DragTimes to get in on the action.

Having posted several YouTube videos featuring the Tesla Model S doing pulls at the local strip, DragTimes encountered questions about just how many races that car might be able to run before needing to re-juice its battery pack.

The publication monitored the energy being used by the Tesla during full-throttle, quarter-mile runs, and determined that the net use (after energy from the regen braking was added back in) amounted to just 0.5 kWh per go. Considering that the full battery capacity is 85 kWh, DragTimes figured that the Model S is good for a remarkable 170 races before needing a recharge. By that math, and using electricity costs in DragTime’s home state of Florida, each race would cost just a nickel and a penny’s worth of electricity.

With respect, that theoretical number is probably way too high. For starters, the car would expend some energy getting to and from the starting line between races. Perhaps more critically, the system is designed to not allow for a completely full charge or deletion of charge, so the car can’t use all 85 kWh. Still, 100 runs is in the realm of possibility. In the video below, the narrator makes mention of 150 runs, which is optimistic but more likely. Cheap thrills, in any case (once you’ve paid for the car).