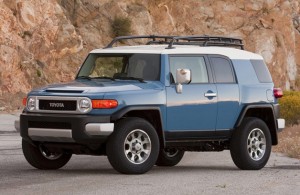 Now, hold on. This recall isn’t quite as serious as it sounds. Yes, Toyota is recalling 11,489 FJ Cruiser models from the 2007 to 2013 model years, and yes, it’s because the vehicles, as the National Highway Traffic Safety Administration states, “fail to conform to Federal Motor Vehicle Safety Standard No. 108, ‘Lamps, reflective devices, and associated equipment.'” But read the fine print and you’ll see the catch: This recall is only for vehicles fitted with the automaker’s auxiliary lighting kit that can be mounted to the front bumper.

Basically, the auxiliary lamp assemblies use 55-watt bulbs, and when these are turned on in conjunction with the upper beam headlamps, it’s a pretty blinding sight. NHTSA states that excessively bright lights can blind other drivers, increasing the risk for a crash.

All Products Associated with this Recall
2007-2013 TOYOTA FJ CRUISER

Toyota Motor Corporation (Toyota) is recalling certain model year 2007-2013 FJ Cruiser vehicles manufactured January 25, 2006 through February 23, 2013 and equipped with a Toyota Auxiliary Driving Lamp Kits mounted to the front bumper. These lamp assemblies include 55 watt bulbs and due to this wattage, the combination of the upper beam headlamps plus the auxiliary lamps are too bright and exceed the maximum light output allowed for an upper beam headlamp. Therefore, these vehicles fail to conform to Federal Motor Vehicle Safety Standard No. 108, “Lamps, reflective devices, and associated equipment.”