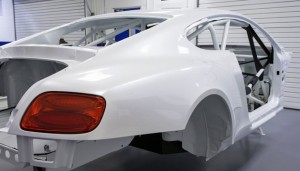 Porsche’s new LMP1 Prototype isn’t the only motorsports news coming out of Volkswagen AG this week. After unveiling its new Continental GT3 at the Paris Motor Show last year, Bentley has released some new images and details as this racecar continues its development. Similar to the Porsche announcement, Bentley’s new GT3 marks a significant return to motorsports, only in this case, Bentley hasn’t raced a car since 2003 – a winning effort at the 24 Hours of Le Mans.

From street to race form, the Continental has dropped about 2,200 pounds by shedding many of the luxury and tech features that make the street-legal Continental GT the car that it is – including 50(!) electronic control units. The Continental GT3 uses the same 4.0-liter, twin-turbo V8 as the road car, but we’re guessing output has been tweaked a bit from the standard 500 horsepower. Except for the carbon fiber hood, decklid and doors, Bentley says that the body of the GT3 is a direct carryover from the Continental GT.

Inside, even a stripped interior and full roll cage won’t stop Bentley from being Bentley as it gives this racecar the same attention to detail as its road cars – the seats, steering wheel and door pulls all receiving the hand-crafted treatment from the factory in Crewe. There is no word as to when the Continental GT3 will make its racing debut, but more details about the car can be found below in the official press release.

(Crewe, 12th June 2013) Since the world debut of Bentley’s GT3 Concept Racer at the Paris Auto Salon in September 2012, a dedicated team of Bentley engineers has been developing the Continental GT3 in preparation for Bentley’s highly anticipated return to the track. Building on a rich racing heritage spanning ninety years, the new Continental GT3 is set to explore the extreme potential of Bentley’s iconic Grand Tourer and exploit the performance DNA contained within every Bentley.

With expert guidance and cooperation from Bentley’s GT3 technical partner, M-Sport Ltd1, the race-ready version of the Continental has been taking shape over the last six months. Leading the project is Brian Gush, Bentley’s Director of Motorsport, who took the company to victory at Le Mans in 2003. He comments: “Motorsport is an integral part of Bentley, and the performance and endurance qualities of all of our road cars reflect this racing heritage. Not one single part of the GT3 has escaped our attention, and the result is a car that can compete with the field in terms of factors such as power, weight and aerodynamics.”

Powered by a race-configured version of Bentley’s highly efficient 4.0-litre twin-turbo V8 engine, the GT3 puts its power to the road via a six-speed sequential racing gearbox. Double wishbone suspension, four-way adjustable dampers and competition brakes make up the chassis system, while more than 1000 kg of weight has been saved over the Continental GT road car by removing the equipment and parts that make the road car such a luxurious and refined Grand Tourer such as double glazing, over fifty ECUs and extensive electrical systems. The exquisitely trimmed Continental GT doors have been replaced by race versions, weighing just 12% of the originals.

The iconic silhouette of the road car is retained as the main body shell is almost a direct carryover, while doors, boot lid and bonnet are now hand-crafted in carbon fibre. The bodyshell itself benefits from a comprehensive FIA-specification roll cage, more than doubling its stiffness. Meanwhile, the carbon fibre racing seat has been trimmed by the craftsmen and women of the Crewe factory, who have also meticulously stitched the racing steering wheel and door pulls, just as they would on a Continental GT road car.