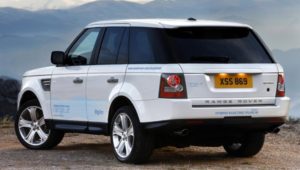 You know electric cars are in the ascendancy when even the fearsome 4x4s start looking to add an extra little spark to their energy production and storage.

Land Rover has just announced it’ll demo one — there are multiple working versions — of its development prototypes at the Geneva Motor Show next month, treating us to an exhibition of what a diesel engine can do when augmented with some electric firepower.

The Range_e’s design is based on the Range Rover Sport and its 3.0-liter TDV6 core, however the new vehicle is capable of going a full 20 miles purely on its electric charge and touts a whopping 690-mile range altogether

Let’s hope Geneva shows enough interest in the Range_e to compel Land Rover to turn it into a commercial reality.