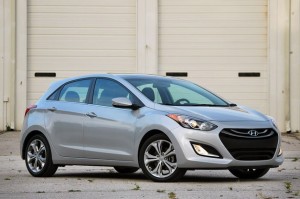 If ever there were an award for the most bastardized label in the automotive world, the Gran Turismo/Grand Touring/GT moniker would be an easy frontrunner. Once reserved solely for sporty coupes, the GT letters have taken a big hit over the years, but things got downright embarrassing with the BMW 5 Series Gran Turismo. For 2013, Hyundai is helping to muddy the waters even further by slapping a GT badge onto the hatchback version of its top-selling model, the Elantra.

In the case of the 2013 Hyundai Elantra GT, though, this name is just recycling the Elantra GT name from the early 2000s, albeit on a more stylish, modern and all-around better five-door. Hyundai has created quite a competitive lineup since its Fluidic Sculpture design language hit the market, but one area that it has paled in comparison to rival automakers is in the hatchback department. With a plethora of budget-minded compact cars currently on sale, Hyundai now finds itself in the unique position of being the only automaker to offer a compact sedan, coupe and hatchback with the 2013 Elantra. Still, with the compact segment more crowded than a public school classroom, we spent a week with the new Elantra GT to see how it stacks up against the hatchback competition.

Its dimensions make it arguably the most attractive and proportionate among the three Elantra bodystyles.

Compact car design has come a long way in recent years, and Hyundai has arguably been leading the way with the fifth-generation Elantra that is now a couple of years old. With their bulging wheel arches, strong character lines and oversized grilles, each version of the Elantra – coupe, sedan and hatchback – shares many traits with the others, yet all have their own identity. As is often the case with sedan and hatchback models, the GT is much shorter than the sedan, with its overall length reduced by nine inches and even a wheelbase that has been cut by two inches, but it is also two inches taller and marginally wider. The GT’s dimensions make it arguably the most attractive and well-proportioned among the three Elantra bodystyles while providing the added passenger and cargo volume expected from a hatchback.

Even better, the 2013 Elantra GT has a more conventional hatchback design as opposed to the previous Elantra Touring that was a boxier station wagon. Both models are actually based on the European Hyundai i30, which is more like a close cousin to the Elantra rather than an identical twin, giving the Elantra sedan and GT similar but noticeably unique appearances. Aside from the obvious two-box design, the Elantra GT’s face is more upright with a larger grille, and it also offers unique wheel options, including these 17-inch alloy wheels with chrome pockets.

This Elantra GT rolled into our driveway with a $25,365 asking price.

The subtle differences between the Elantra and the i30-based GT hatchback continue inside the car where the sedan’s Coke-bottle-shaped center stack gets a flatter, more conservative look. Overall, Hyundai is pretty consistent with the interiors of its current lineup, so you’ll still get plenty of dark colors, swoopy lines and blue backlighting. Hyundai’s interior design work has definitely helped step up the game of a segment that not too long ago saw power windows and door locks as standout features. The features list on this tester includes standard equipment like Blutetooth, heated front seats and Hyundai’s Blue Link telematics system, as well as options like perforated leather seats, a panoramic sunroof and navigation system. Even with all of these features, the Elantra GT should still be fairly priced for potential buyers to cross-shop other hatchbacks since it comes standard in a single, well-equipped trim level with a limited number of option packages.

The base Elantra GT comes in at just under $20,000, but our tester came with both the Style and Tech packages that make the inside of the car feel like anything but an economy hatchback. As tested, this Elantra GT rolled into our driveway with a $25,365 asking price, which is priced competitively against a similarly optioned Ford Focus 5-Door while carrying a feature list that is enough to make some Japanese competitors – namely the Mazda3 and Toyota Matrix – blus

Buyers can get the manual transmission even on a fully loaded model.

In a day when high beltlines and thick door pillars are making cars feel like claustrophobic tanks, the cabin, especially with the panoramic roof, feels airy and offers excellent visibility. And although the size of the Elantra GT has shrunk in comparison to the sedan, there is no lack of space inside this car with rear seat passengers getting plenty of head and legroom and a maximum cargo capacity of 51 cubic feet of cargo, which is enough to put the Elantra GT among the top of its class. Lowering the seatbacks is a two-step process that requires the seat bottoms to be folded up out of the way, and while this does take an extra step over and above some easier flip-and-tumble mechanisms, it results in a perfectly flat load surface. There’s actually little to be disappointed with about the styling of the interior, but if we had to offer a gripe about the car’s cabin, it would be the fact that most of the major buttons are so big that they look like they were intended for use on a Jitterbug cell phone.

Like its single-trim lineup, Hyundai continues to keep things easy under the hood of the entire Elantra lineup with a 1.8-liter four-cylinder producing 148 horsepower and 131 pound-feet of torque as the sole engine. The only powertrain option you get with the Elantra GT is your choice of transmission: either a six-speed automatic or manual. Our car came with the automatic, which turned out to be one of its biggest downfalls, as it offered sluggish shifts that never felt comfortably quick enough while driving around town. It’s possible that the transmission has just been programmed to maximize fuel efficiency, which, even after the well-publicized reduction in fuel economy last year, still returns a decent 27 miles per gallon in the city and 37 mpg on the highway. Fortunately, since the Elantra GT only comes in a single trim level with available options, buyers can get the manual transmission even on a fully loaded model.

We credit most of this hatchback’s driving enjoyment to its relatively low curb weight.

In spite of the automatic transmission, the Elantra GT can be fun to drive for what it is thanks to its surprisingly good power-to-weight ratio. Hyundai says that the optional Style Package adds a sport-tuned suspension, but we credit most of this hatchback’s driving enjoyment to its relatively low curb weight. Hyundai says that the Elantra GT with the automatic transmission ranges from 2,784 pounds up to 2,959 pounds without being specific, but our tester’s panoramic sunroof, bigger wheels and fully loaded interior technology would likely peg it at the top end of the scale. Looking at the spec sheet, the GT only packs about an extra 100 pounds over the sedan, yet it’s still about 200 pounds lighter than the Mazda3, which is probably the sportiest budget hatch on the market.

Now, the Elantra GT isn’t going to make you the king of the autocross, but it doesn’t feel like an unenthusiastic, top-heavy economy car either, at least with Active Eco not selected. The Active Eco driving mode considerably numbs the throttle to optimize efficiency, but it obviously does so at the expense of responsiveness. A word of advice here: If you’re about to pass a car, be sure this button is in the “OFF” position unless you like playing chicken with oncoming traffic, as downshifts come in much later than expected. During our First Drive of this car, we noted that the engine felt “gutless” going up hills at low engine speeds, but our time with the GT for this review was on the flat roads of Northeast Florida and the engine managed just fine in these conditions.

The ride quality is one of the Elantra GT’s bright spots.

Although the powertrain is fair at best, the ride quality is one of the Elantra GT’s bright spots. This hatchback proves that a compact car doesn’t have to suffer from a cost-cutting suspension with Jell-O-like qualities nor must it have an artificially stiff, molar-loosening sport suspension; instead, Hyundai delivers a surprisingly smooth ride with an impressively quiet cabin. In fact, the most noticeable disruption that makes its way into the cabin is an odd whirring noise that comes from the rear of the car whenever the transmission is shifted into Reverse. As it turns out, this annoying noise came from the rearview camera that pops out from behind the motorized Hyundai badge on the liftgate when backing up. It’s a great way to keep the car’s lines clean, but the execution just misses the mark since the noise sounds out of place.

Another technology that plagues the Elantra GT is the Driver Selectable Steering Mode, which we’ve harped on in reviews of other Hyundais before. This feature, which is quickly spreading through the Hyundai and Kia ranks, uses a button on the steering wheel that allows drivers to instantly change the weight of the steering system using Sport, Normal and Comfort modes. During our week with the car, we found that the Sport mode actually made the car easier to drive in highway driving, while Normal was better suited for driving around the city; we never figured out a time where you would purposefully want the overly assisted and sluggish response of Comfort mode. Looking for a little adventure? Keep the Elantra GT in Active Eco mode and toss the steering into Comfort and you’ll feel like you just mixed the wrong drugs.

At the end of our time with the 2013 Elantra GT, it was obvious just how far compact hatchbacks have come in recent years. The Elantra, once a car you bought on a budget, now makes for a great purchase decision on its own merits for reasons other than price. The leather-clad interior of our tester, for instance, is probably better than what you find in a mid-level luxury car from just a few years ago, and the same goes for the styling, too. Looking back at some of the recent hatchbacks sold in the US, it’s easy to see why these five-doors have gotten such a bad rap, but hopefully this new breed of cargo-friendly compacts can help erase most of the bad memories from our minds. Rather than repurposing the played-out GT tag, maybe one day this Elantra will proudly wear an HB badge.