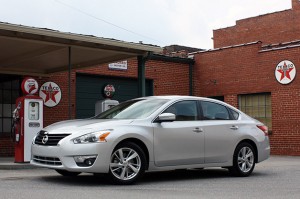 Intent on not eliminating itself from consideration, and adapting to the way consumers research new car purchases, Nissan has announced price discounts now in effect, indefinitely, on seven models: the Altima, Armada, Juke, Maxima, Murano, Rogue and Sentra.

It was found that Nissan’s price points fell outside the competitive pool when prospective buyers searched for cars based on maximum price.

The price cuts vary and depend on the equipment spec, but they range from several hundred dollars to thousands of dollars; the MSRP of the Altima drops by $580, the Sentra by $730, the Armada by $4,400. Discounts on the Murano alone range from $1,460 to $2,410.

Under orders from CEO Carlos Ghosn the brand is working to raise its US market share to ten percent by 2016, from 7.9 percent currently – which includes Infiniti – and appears to be optimizing its placement every step of the way to do so.