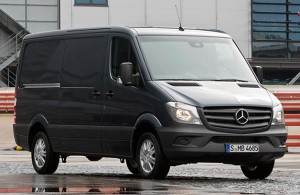 Daimler and Renault officially joined hands in April 2010. Since then, Nissan has agreed to build engines for the Germans, Daimler is expected to construct a plant near the Nissan plant in Mexico, the Smart ForFour and Renault Twingo will share platforms and electric siblings and the same Renault manufacturing facility, and Mercedes is supposedly considering a Renault-based X-Class vehicle to slot between Smart and the A-Class. Not bad for less than three years’ work.

But wait, there’s more. According to a report in Automotive News, the two firms are talking about developing a large van. When it comes to big cargo haulers, Mercedes is in bed with Volkswagen at the moment, but the contract has just three more years to run and VW has announced its intention to go solo on the next-generation van.

This wouldn’t be the first commercial vehicle tie-up for the brands: Mercedes already uses the Renault Kangoo as the base for its Citan. Both Daimler and Renault have confirmed the talks, but have not confirmed a French newspaper report that the manufacturing site has already been chosen in France.