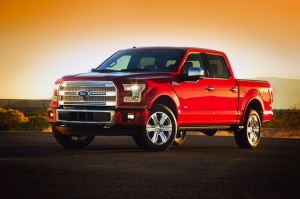 No one’s going to confuse the massively popular Ford F-150 pickup truck with a green vehicle, but at least it performs well in an environmental sense when compared to its brethren. The Automotive Science Group (ASG) took on the odd (to us, at least) task of measuring which pickup trucks are friendliest to the environment and found that the big seller in the Blue Oval’s flagship F-series came up big, while the Toyota Tacoma came up, well, slightly smaller. That’s a good thing.

Among the 245 light-duty trucks that ASG studied, the 3.7-liter V6-powered F-150 won ASG’s award for full-size trucks for both regular and crew cabs. Meanwhile, the 2.7-liter Toyota Tacoma, with its fuel-economy rating of 23 miles per gallon combined, had smallest overall life-cycle carbon footprint and won ASG’s two mid-sized categories. Finally, the Chevrolet Silverado won best all-around performance in the full-size extended-cab category. The ASG factored in eco-friendliness, price and social performance (which is measured by, “considering the rights of those charged with vehicle manufacture and assembly”) to come up with its findings.

Sales of Ford’s F-Series trucks rose 8.4 percent last year to 74,592 units and accounted for more than a third of the total 2013 sales of Ford and its Lincoln unit. Check out the ASG’s press release below.

25 March 2014 [Santa Rosa, CA] – With a myriad of eco-branded trucks hitting the North American marketplace in 2014 – from Ford’s EcoBoost and GM’s EcoTec3 to Ram’s latest addition, the EcoDiesel – the Automotive Science Group (ASG) was prompted to offer an objective, scientifically-based assessment to determine exactly which 2014 trucks actually earn their “eco” badge.

According to ASG and the principles of ecological economics, a vehicle’s eco-rating must be multi-faceted to include both environmental and economic considerations, and so the Group’s proprietary rating platform – the Automotive Performance Index – does just that. Using a unique combination of vehicle data inputs that include conventional specifications as well as social, environmental and economic performance indicators, ASG’s vehicle assessments empower consumers to make choices based on one’s personal principles and financial requisites. Whether it’s a commitment to buy American-made, an environmental prerogative to reduce one’s carbon footprint, or purely an economic choice to save on fuel costs, ASG’s vehicle ratings are a comprehensive guide for today’s buyers.

ASG’s 2014 Study assessed 245 light-duty trucks to trim level detail, annotating the performance differences between trucks with varying cab size, bed length, drivetrain and engine combinations. While these significant differences in trim packages are on par with those distinguishing Crossover SUVs and Full-Size SUVs, truck buyers are offered little distinction in this regard when performance claims are advertised, as is often the case with the aforementioned eco badges. This is where ASG’s insights differ – and empower.

“ASG’s 2014 Study again highlights the value of life-cycle thinking as critically important in determining overall truck value, both from an environmental and economic perspective,” says Colby Self, Managing Director of the Automotive Science Group.

ASG reduced Full-Size light-duty trucks into three sub-categories: Regular Cab, Extended Cab and Crew Cab. Mid-Size trucks were reduced to two sub-categories: Extended Cab and Crew Cab. Only one brand featured a 2014 Mid-size truck with a Regular Cab, and so this category was omitted for lack of market competition. By comparing trucks of relative size and capability against each other, rather than lumping all light-duty trucks into one pod, truck buyers can now look to the competitive set of trucks in the cab formation they desire.

When it came to those trucks with eco-branding, GM’s EcoTec3 trucks were the only eco-branded models to earn top awards in ASG’s 2014 study.

One may have expected the Ram EcoDiesel (3.0L V6) with class-leading fuel economy to earn top awards in ASG’s assessment, but there’s more to ASG’s assessment than fuel economy alone. The life-cycle environmental cost of obtaining this diesel-fueled MPG rating must also be considered. In the diesel configuration, combustion emissions are higher with each gallon of fuel consumed. Diesel fuel has higher energy content per gallon than gasoline, but due to the higher density of diesel, it also releases more greenhouse gas emissions per gallon combusted. The diesel engine configuration also weighs significantly more than its unleaded gasoline counterparts, and so the manufacturing impacts – from material extraction and processing – adds yet another environmental knock on the diesel design.

These disadvantages are often overcome in diesel configurations by greatly improved fuel economy, inherent to lean burning engines, but sadly the fuel economy improvement in the 2014 Ram EcoDiesel (3.0L V6) design is not sufficient to offset other life-cycle impacts considered in ASG’s assessment. From an economic perspective, the price premium paid upfront for the EcoDiesel begins to offset the financial incentives one would expect to redeem with the 9% fuel economy advantage that the EcoDiesel has over the next best truck in its class. The final blow is the 12% cost premium diesel demands at the pump over gasoline (average U.S. price as of March 2014).

This is not to say that diesel designs do not have promise – they do – but the fuel economy advantage over gasoline engines must exceed the 2 MPG improvement (EPA estimated combined MPG) that the EcoDiesel currently promises.

While the EcoDiesel was not an ASG top selection for 2014, other Ram models did excel in ASG’s study: the Ram 1500 (Tradesman 3.6L Pentastar V6) Regular and Crew Cab trucks both won ASG’s 2014 “BEST ECONOMIC PERFORMANCE” Award, distinguished as having the lowest cost of ownership among Regular and Crew Cab Full-Size trucks in North America. The Ford F-150 (XL 3.7L V6) won the 2014 “BEST ECONOMIC PERFORMANCE” Award in the Extended Cab category.

From an economic standpoint, the Nissan Frontier (S King Cab 6 ft. box) was revealed to have the lowest cost of ownership over a five-year economic forecast, taking into account purchase and operating costs of all model year 2014 trucks sold in the North American market. The Nissan Frontier was considered a Mid-Size truck in ASG’s assessment.