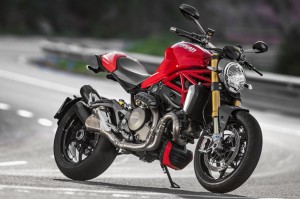 The Ducati Monster 1200 S has the power-to-weight ratio of a Bugatti Veyron 16.4 Grand Sport Vitesse and the contact patch of a playing card. I’m elbows deep into leaning this pulsing, growling, screaming red animal across a one-lane hairpin on the edge of a volcanic island, when a sequence of questions flit through my mind: What if I hit a patch of gravel? What if a car rounds the corner and barrels toward me? What if I overcook the bend and somersault down the mountain, followed by a tumbling 461-pound bike?

Though these thoughts occur to every motorcyclist, they’re less toxic than one might think aboard the latest naked bike from Ducati.

The Monster barks in anger when its massive, 145-horsepower L-twin fires up, and its distinct lack of bodywork lends its mechanical entrails a fascinating – if somewhat grizzly­ – presence. There’s the pretty (Brembo monoblocs, TiN-coated Öhlins shocks, an aluminum single-sided swing arm), the ugly (cooling hoses, sloppy wiring, and an ill-fitting radiator shroud), and the optically clever (twin exhaust silencers of subtly staggered proportions, an LED-illuminated license plate mounted on a rear hugger). But despite all this visual and visceral data, the bike’s electronics systems have a sneaky way of taming this two-wheeled

Just like its Diavel, Multistrada, Panigale, and Streetfighter stablemates, the Monster’s raw talents are finessed with three riding modes managed by the left switchgear, which translate to a unique display for each mode on the TFT display. “Sport” gives you the full, unfiltered 145 horsepower with sharp throttle response, minimal intervention from the anti-lock brakes and less generous traction control. “Touring” smooths the throttle and introduces ABS and TC sooner. “Urban” cuts the juice to 100 hp with commensurate changes to electronic assistance. Each parameter can be also individually adjusted and saved to a mode setting (when the bike is stationary), and purists can rest easy: all electronic aids are fully defeatable.

In other, arguably bigger news, this third generation of Ducati’s nearly two decades-old platform changes allegiance from air and oil to liquid cooling – think of the dawn of the Porsche 911’s liquid-cooled, post 993-era – with a 28-pound weight penalty but a 45-horsepower advantage. This isn’t the first time Ducati’s Monster has made the switch, but the changes are more significant than ever before. The 1,198cc twin, derived from Diavel and Multistrada duty, is now a fully stressed member with its tubular steel trellis frame offering double the stiffness of its predecessor. The engine incorporates an 11-degree valve overlap for gruntier low and midrange torque, in contrast to the higher-strung Panigale motor’s 40-degree overlap, which lends the superbike an edgier air. The mill meets a six-speed gearbox with straight-cut gears and a hydraulically actuated slipper clutch, and the rear 17-inch alloy wheel is chain driven. Ergonomics have also been eased, with handlebars relocated higher and closer to the rider.

The motor figures prominently in my careening path down the aforementioned windy road, as well it should – after all, everyone knows the soul of any hotheaded two-wheeler is its engine. The Monster’s powerplant is the Rich Little of mills, capable of transforming from a paragon of honey-smooth mellowness to a roaring hellion of a rager that hauls the mail halfway to oblivion. The sensation of speed aboard the Monster is heightened because, not unlike a diesel engine, the twin’s low and midrange torque tugs with a satisfying, locomotive-like insistence. If pavement allows, you’ll also find that the Monster isn’t lacking in spunk as the digital tach approaches the 10,000-RPM mark, though it doesn’t lurch quite as enthusiastically as its big-bore superbike counterpart, the Panigale.

Lay off the throttle and brakes for several seconds and you’re able to scroll through the three modes, revealing palpably differing degrees of hairy-chested aggressiveness. Yank the right handgrip in “Sport,” and the motor shoots the bike forward like it’s being propelled by a giant, spring-loaded catapult; jab the brakes, and the Monster’s tires lock for a micro-second before ABS kicks in. Similarly, the rear wheel will spin momentarily before engine power is trimmed – all of which leaves the impression that these mechanical and electronic underpinnings trust you to push the bike’s limits but toss in a safety net when you’ve gone too far. As evidenced by one rider who dumped a Monster in a low-speed right-hander, it’s also possible to overestimate the mechanical grip of cold tires and low-side the bike; sometimes electronics can’t get in the way of good ol’ fashioned physics.

During a day-long ride through the rollicking (and often terrifying) roads on the island of Tenerife, the Monster’s prodigious power was countered with disarmingly light and precise steering effort, which boosted confidence when it came to planting the front wheel into turns and choosing the proper arc through the aforementioned hairpins. A longer 57.1-inch wheelbase makes the Monster less wheelie-prone, but there’s still satisfying front-end lift under hard acceleration, which has been enhanced with greater grunt and shorter gearing. Though Ducati says the bike’s balance has been moved rearward (shifting the bias from 50/50 to 47.5/52.5), the center of gravity has also been dropped .78 inches to assist with cornering dynamics. The S version inherits Brembo monobloc brakes with dual 13-inch discs from the Panigale, but a different master cylinder makes the negative Gs more progressive, trading some initial bite for more gradual stopping power.

And so, as I’m bombing across some of Tenerife’s most challenging stretches, hugging the inside line as the Monster’s big L-twin rumbles and responds to apex-out throttling and steady power climbs, Touring mode offers just the right combination of tractable engine performance, reactive throttle response and unobtrusive traction control. Shaping this much raw engine power into a controllable form is notable, but even more impressive is how the Monster doesn’t feel like its character has been diluted. Even in its most choked mode (Urban), the engine feels lax enough to belong in a beginner bike, though it still growls and groans like a perturbed predator. Even more surprising are the Monster’s welcoming accommodations: thanks to the handlebar’s easy reach and thicker seat foam, I experienced none of the torture-rack ergonomics associated with Italian muscle bikes of yore. My knees were, however, bent more than I prefer, especially when keeping the balls of my feet on the pegs, where they offer the most control during aggressive cornering. The heat shield over the exhaust also turns your right heel out a bit – though the bike’s overall comfort level is remarkable considering its level of sporting focus.

The Monster 1200 is priced at $13,495 for the standard version, or $15,995 for the “S,” which adds Öhlins suspension, uprated brakes, ten more horsepower and five additional pound-feet of torque, and some carbon trim. Unlike more affordable Japanese alternatives, the Monster loses the bargain basement, barely five-figure naked bike selling point that stokes the interest of value-obsessed bike shoppers. For those willing to throw a few more thousand towards their mid-life crises, the Monster brings more adaptability and emotion to the table, not to mention the overt and undeniable sex appeal of a fire-breathing Italian machine.

The mechanical refinements and electronic enhancements ­– particularly with the S model’s increased power and premium suspension – make the third-gen Monster a tempting proposition in the face of cheaper bikes.

Well, there’s some messiness when it comes to presentation, with components slapped together in a way that belies Ducati’s manufacturing renaissance of late. Perhaps the bikes at the media ride were hastily assembled pre-production models, or maybe the engineering team simply outmuscled the design crew. At the end of the day, the best view of the monster is hunched over its 4.6-gallon fuel tank, staring down the road just past the TFT display. From the saddle, the Monster’s riding dynamics distract from its looks and steal the show – when the offending bits are out of sight and you’re focused on the ride, this unclothed machine comes across as more special, and its charisma is more convincing.

It’s not the most slickly styled naked bike, and certainly not the cheapest. But thanks to exceptional performance and shape-shifting electronics, the Monster reveals – in a definitively un-Italian way – that there is a road to sex appeal through science.